USB Powering of the N2PK VNA

I recently had a N2PK VNA built up and found it a useful tool. I thought that it would be useful for antenna measurements and wanted to run it with a laptop PC. As most newer laptops do not have a parallel port on them I decided to explore running it off the USB port. USB has its attractions when it works properly and the idea of making the VNA plug and play appealed to me. My initial thoughts were to try using a standard USB to parallel port cable. The problem I found with one of these devices was that WinXP insisted on identifying it as a printer and set it up as a USB printer. No doubt there is a way round this if you know more about the operation of the USB port than I do.

Having found that this approach was not going to work easily I bought one of the Elrasoft Cypress EZUSB modules described on Dave Robert’s, G8KBB, website. I followed the instructions to program the chip with the correct PID and VID for the VNA application having downloaded the EZUSB control panel from Cypress’s website. All that remained to do was to let the PC detect the USB board and wait for it to ask for the drivers etc for the VNA which I had already downloaded from Dave’s website. Once the installer program was pointed at the folders with the *.inf files all went smoothly.

Having made the VNA communicate over the USB bus my thoughts turned to powering it from the bus. A USB port can provide 5 V at around 500 mA. A quick check with a multi-meter showed that the VNA only took about 200mA from its 5 V supply. The VNA also requires a nominal +12 V supply which is used to power a 7661 voltage inverter chip. This is used to generate a low powered -5 V supply on the VNA PCB. The 12 V is clearly not very critical and anywhere above about 7-8 volts seemed adequate. The problem was to find a way of producing 9-10 volts from the 5 V USB supply. The solution was to use one of the isolated DC-DC converters that are on old 10BaseT Ethernet cards, (the ones with BNC connectors). These are packaged in a 24 pin DIL package and are commonly made by YCL and carry the marking DC-101. The data sheet is here. Ethernet cards of this vintage are obsolete for computer use but have a number of useful parts on them and usually can be obtained for little or no cost. There are other makers of the DC-DC converter part but the packaging seems to be fairly standard. The circuit was lashed together and all worked well. Figure 1 is a circuit diagram of the arrangement used.

Figure 2 shows the Elrasoft USB board along with the YCL DC-101 mounted on Veroboard set up for testing. Figure 3 shows the VNA in action on my laptop measuring a 6 MHz crystal characteristics. Look no power unit! The small tin box in front contains the calibration pieces and some SMA to BNC leads. 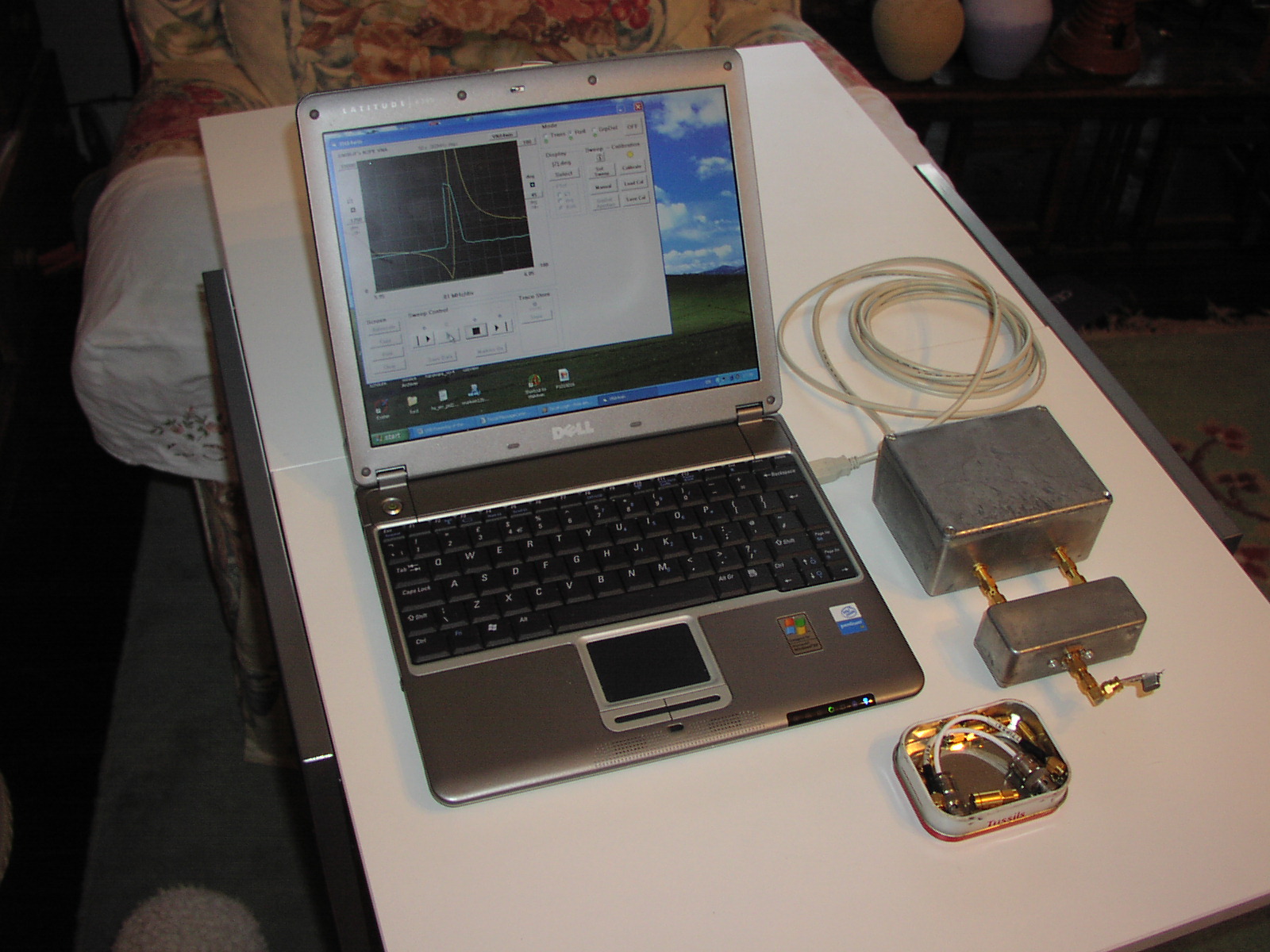